If you haven’t already heard of Keir Wenham-Flatt, he is the rugby strength and conditioning specialist for Los Pumas Argentina and Argentina Rugby Union.

Keir is a highly qualified S&C coach boasting a number of qualifications including a Masters degree in S&C and a Bachelors degree in sports science.

His work has been featured in Mens Health, Mens Fitness and many top S&C websites. Keir is also a popular guest speaker at various universities, rugby clubs and unions.

Keir has kindly shared an interesting article with us regarding discipline within the field of strength and conditioning. I hope you can incorporate some of these suggested techniques …

Learning lessons from the military

The longer I coach, the more I realise that though we are a science based discipline, there are limits to science in the strength and conditioning field. This is for several reasons:

I should preface this post by stating that this is in no way an attack on the value of science to strength and conditioning practice. I love science, I use it every day in my work and at times I have been accused of being an overly scientific coach. Nor am I apologising for coaches who- for the above reasons- completely abandon science, shrug their shoulders, and adopt a training process that is akin to a mixture of cheerleading and throwing shit at a wall to see what sticks.

However in light of the above, the longer I coach the more I look to other fields to advance my coaching practice and the performance of my athletes. A field in which I have taken particular recent interest is the military. Though the stakes of winning and losing are obviously far higher in the military than professional sport, I have identified an interesting number of parallels between the two fields:

For today’s post I want to share with you some insights from a fantastic podcast that highlights all the lessons that we can learn as coaches from the military. The interview was between Tim Ferris and General Stanley McChrystal, who was responsible for leading the allied war effort in Afghanistan in the 2000s. Here are some of the key points I took away from General McChrystal (my notes in italics):

*It is rarely the brightest officers or those with the best disciplinary record who make the best soldiers. Consistently it is those who are rated highest by their peers who succeed (Train the person just as much as you train the athlete. Good teams are filled with good people).

*If you are a commanding officer, you don’t have to be able to physically dominate those under your command but you must be credible and demonstrate effort (Do not be the out of shape coach who is never seen training).

*What would your biggest critic or worst enemy say about you as a person? If you cannot answer this question out loud perhaps you do not have the self awareness and/or courage to lead a group of people (This is getting used as an interview question for me!).

*The turning point in Gen. McChrystal’s career was when his commanding officer told him he could be great- and 35+ years later he still remembers those words and feels their effect on his career. (What can we say to our athletes to have a similar positive effect on their lives?)

*”Success is purpose of organisation shared by members of a team” (Does your team have a purpose or big vision that everyone is working towards? Is it shared and lived by everyone on the team?)

*Red teaming is key to a successful plan. Red teaming is where you ask someone from outside the team with a fresh set of eyes and ideas to tear your plan to pieces. If your plan can stand up to red-teaming, it’s a good plan. Never get married to your ideas. Always test the key assumptions of your plan.

*Learn to deal with incomplete information. The speed of warfare is such that commanding officers are forced to take decisions without always knowing the full picture. Learn how to react to new information, have contingencies in place for every eventuality, the plan should always be evolving.

*Leadership is about asking and convincing people to do things they do not necessarily want to do. Relationships are vital in this dynamic. (Great programmes often require athletes to dig deep and make tough commitments. The harder you ask them to go, the stronger your coach-athlete relationship needs to be.) 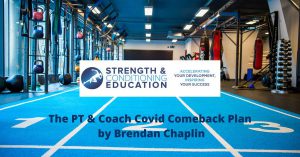